I was never a big fan of Twitter. I consider it a way to waste time, a nice thing to play with is you are an early adopter. An online gadget. Apparently, other people considered it the same. In Romania twitter is 1/1000 of facebook also. In US, the ratio is much better: aprox 1/4.

Now, I see that in Alexa, for the past months, twitter is going down. So, if you were not an early adopter, now you are in the trend if you are not using it 🙂

The decrease is not major, but is significant in time. Click to enlarge. 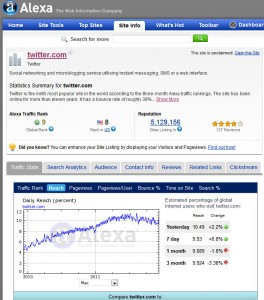